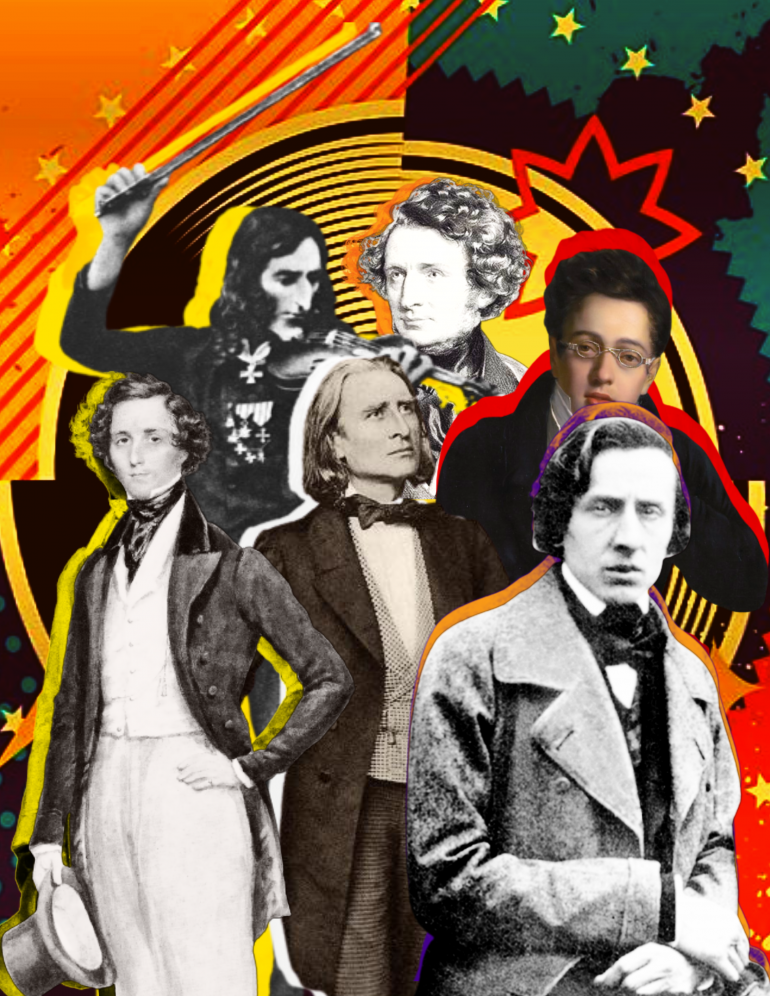 Here’s a completely random question – why have six separate, crazy talented composers, when you can have one BIG composer supergroup?

(This wasn’t even the kookiest idea in our drafts, trust us.)

Let’s entertain the idea of super grouping 19th-century composers – a band that could have conquered the world.

Keeping in mind that what we’re interested in is –

How did these composers, if they did indeed, market themselves in their time?

How were they ‘marketed’ regardless of their personal preferences?

And would it have a fit (it most certainly would) certain tropes we know today when it comes to music stardom?

– all this and more in Mordents’ one-of-a-kind speculative investigation.

Note: In this article, we will be deferring to the holy scripture of media – TvTropes – and their definition of a boy band, consisting of a 5-point requisite public personality formula.

Chopin: The Shy One

Doesn’t take a lot of convincing to accept that Frederic Chopin would definitely be the shy one. The Jungkook of the bunch, if you will. (Here’s hoping there actually exists a cross-section of BTS and MittelEuropean pianism fans – this reference is for you.)

As we mentioned in Could Chopin Win The Chopin Competition Today, the composer’s reputation from the 19th century onwards was built heavily on a few chosen aspects from his biography – the fact that he was a versatile and talented pianist who chose to avoid the concert stage and found comfort within the fairly intimate salon venues of Paris instead.

Added on were the details are taken from comments on Chopin’s apparently mysterious character, made by his contemporaries, for example, this one of Liszt: “Chopin’s character is composed of a thousand shades which in crossing one another become so disguised as to be indistinguishable.”

As to Chopin’s fans’ behavior, writers often limit themselves to mentioning that he certainly provoked rapturous reactions (as evidenced from reviews of his performances), but there’s very little information of how, exactly, this exhilaration manifested.

However – we don’t exactly need to reach back 200 years to study the behavior of an ardent Chopin fan. Taking even a cursory look at the (deeply cursed) state of the classical music community on Tumblr, you can find accounts completely devoted to the composer, such as chopindaily and grandmaster-chopin.

Relying on the previously established idea of his character, (the most fervent) fans today gush about his music, write jokes about him being the OG sadboi (fryderykdelicateflower), share portraits and excerpts from biographies, along with some truly heartfelt tribute letters, routinely marking anniversaries of Chopin’s death.

Described at the height of his popularity as a ‘second Mozart’, Mendelssohn’s buoyant well of melodic invention, the brightness of heart, and coquettish charm of most of his oeuvre carried significant appeal.

The audiences of the time also responded readily to Mendelssohn’s looks – by all accounts described as soft and delicate. One detailed description of the composer’s appearance comes from his student at the Leipzig Conservatorium, Wilhelm Joseph von Wasielewski, who mentions, among other things, Mendelssohn’s:

Hard not to instantly start collecting posters of this guy, huh.

Again, few written testimonials exist of the level of Mendelssohn mania that grew during the 1840s in England and Leipzig – with one significant example being Karl Schorn’s memory of a certain 1842 impromptu concert, which moved female members of the audience to the point of seizing (such a strong word!) the composer’s handkerchief and shredding it to bits, wanting a token of the evening.

Same as with Chopin, Mendelssohn’s charm has seemingly continued to enrapt fans to this day, carrying a great reminder that no one – and we mean no one – is immune to woobification.

Franz Schubert: The Boring One

We will not be taking any questions at this time.

Every boyband needs that one, slightly older, slightly boring guy. It’s just a fact – he’s reliable, steady, and makes all the other personalities pop by contrast.

And Franz Schubert was certainly not nicknamed “Little Mushroom” due to his fiery personality.

While his music, we know, carries within itself a hundred different shades of emotional intensity and covers the full affective spectrum of Romanticism, Schubert didn’t possess much of a “public” persona. And he didn’t have to – the composer spent much of his life off the stage, writing Lieder for private commissions, approaching the public’s eye only during intimate evenings spent within the circle of his friends and acquaintances, known as Schubertiades.

Little is known and much speculated about his private life – while many have devoted entire tomes to the depth of his music, the conclusion on Schubert himself seems to be that he was, all in all, kinda just a regular ol’ 19th-century guy.

Pretty obviously, Franz Liszt would be the leader of this pack: a musician not only talented beyond measure, not only keenly devoted to a solo career but also, by unanimous agreement, an incredibly approachable and deeply sincere person.

We won’t go into too much detail about Lisztomania itself – first of all, as a phenomenon, it merits a separate article, and secondly, it is well known enough to music history aficionados.

For now, it’ll be sufficient to share Heine’s legendary impressions of the man and the myth: “…the contagious power of the ecstasy, and perhaps a magnetism in the music itself, which is a spiritual malady which vibrates in most of us—all these phenomena never struck me so significantly or so painfully as in this concert of Liszt.”

The dark horse of our selected group, the ‘exotic’ (read: not completely central-Europeanized) element, oozing devilish (and therefore, obviously, sexual) energy in his performances, this Italian violinist brought the notion of virtuosity to a whole nother level during the height of his fame in the early 1800s.

Paganini’s odd, inspired contortions and shocking techniques displayed in his performances played a large part in the creation of his reputation as we know it today. Concert reviewers of the time described him alternately as a “magician”, “Mephistopheles”, “Dr. Faustus”, and even (to be pronounced with all the damning might the German language possesses) Hexensohn – a witch’s son.

The virtuoso’s negative image was further enriched by his indulgences in gambling (he opened a casino in Paris and fell into immediate financial ruin) and a penchant for love affairs.

Researchers can’t seem to agree as to the level of which Paganini had participated in the crafting of his public persona, but even during his lifetime, there were rumors the violinist carved notches into his strings in order for them to break on stage and therefore cause a grand, back-breaking culmination of the recital.

Other whispers included Paganini being jailed for murder (?), killing three of his lovers, and of course, the perennial myth – that he sold his soul to the Devil in order to gain mastery over his instrument. The potency of the last rumor was such that it carried a larger consequence than expected – the composer’s remains were not allowed to be buried in the consecrated ground for more than 25 years.

Still, there were upsides to Paganini’s popularity, which was undoubtedly fueled by the mystique the violinist carried with him wherever he went. The artist’s image was printed and sold on the street, and Viennese confectioners started selling Paganini-bonbons. Taxi drivers started calling five-gulden notes “Paganinerls”, referencing the price of his concert tickets. Fifty to eighty people a day (!) came to visit him on his Hamburg tour stop.

Berlioz: The Eccentric One

And lastly, Berlioz: the real dark horse of this group.

Often dismissed from listicles covering the most famous or popular of the early Romanticists, the inclusion of Berlioz’s name in this article might simply provoke the question of – but why? And what for?

Well, because – Berlioz perfectly fills out the role of that one surplus boyband member, the slightly offbeat dude with a kooky sense to his songwriting. (Think Octopus’ Garden and all that.)

An inventive and daring orchestral writer for his time, with lots of misdirected passion and a definitive penchant for quirk, Berlioz is the necessary object of affection for the one last target audience group every manager knows they must cover – the disaffected, the lonely, the ludicrously imaginative. 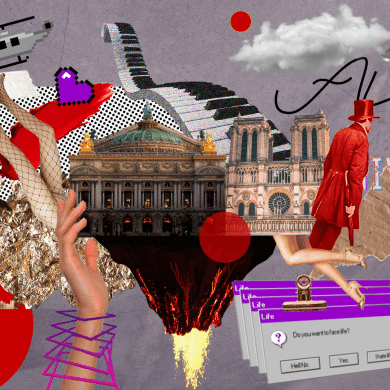